Emmaus Catholic College at Kemps Creek  is a  long way from Korea, but a strong, positive connection is in progress.  Students of Korean language and culture are encouraged by the initiative of teacher Mr Kyle Jung.

Mr Jung organizes annual excursions to the Korean Cultural Centre in Sydney, and has hosted a visit to the College by Korean diplomatic representatives.  A further development is the extension of a relationship between Emmaus College and Guryong Middle School.  A group of Korean students and teachers were guests at the Emmaus campus on May 7th.

A staff morning tea welcomed the visitors with Emmaus Years 7 and 8 students hosting the 24 students for the evening.  A welcoming ceremony in the Emmaus hall began the day’s activities and all too soon on the following day, a Farewell Ceremony was held in the College amphitheatre.


Visitors expressed keen interest in the Emmaus Catholic College environment and learning spaces, while the local students took advantage of the opportunity to ask questionsand share ideas with their Korean friends.

Adrian Calleja, a Year 8 student, found common ground with Korean student Hawnung who was billeted with Adrian’s family.  Having studied and practiced Tae Kwon Do for several years, Adrian was pleased to learn even more about the art.  “In Korea”, Hawnung explained, “a person won’t even be considered for the armed forces until holding the Black Belt qualification”.

Zachary Mehew from Year 8 confirmed “Tae Kwon Do is more than just physical activity.  It is great because it teaches self defence, self discipline, respect and courtesy”.

In Rhian Dudman’s family the hosting of one of the Korean students led to animated discussions about soccer.  “My dad loves soccer”, she said, “and he was particularly interested in hearing about Korean methods of training”.

Zachary was a guide for the students when they were on the Emmaus campus.  “They found the space a very different environment to their school”, he commented.  “The large Emmaus environment, oval and outdoor areas really impressed them.  They also said they liked the opportunities they were given to share information and to observe cultural differences”.

Rhian found the uniforms of both schools had imilarities, and spoke about the foods enjoyed by the visitors.  “I gave my Korean school friend a very large jar of Vegemite to take home” she said, also adding that dance and music featured in the welcoming and farewelling assemblies. “The Korean students had learned ‘Waltzing Matilda’ especially to sing for us” she said.

An exchange agreement has been formalised with Principals of both schools signing.

“It is great that Mr Kyle Jung has done so much toorganise this visit and to foster and encourage our Korean language studies” said Adrian, “and our Principal Dr Brad Campbell, has agreed to the exchange program.”

Zachary agreed. “It is tremendously exciting to think we will go to Korea next year to visit Guryong Middle School”.

Rhian concluded, “we will renew the friendships we’ve made.  Meanwhile we need to work hard on our pronunciation.  I intend keeping in touch with my new found friend from Guryong School”. 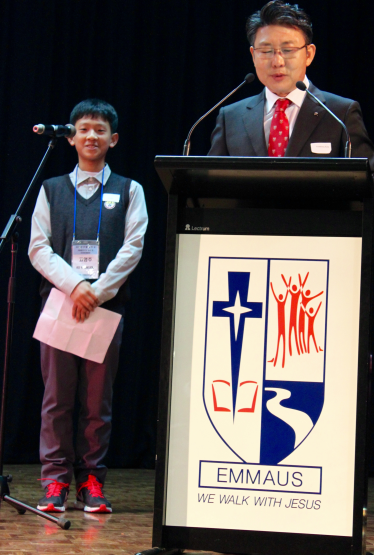