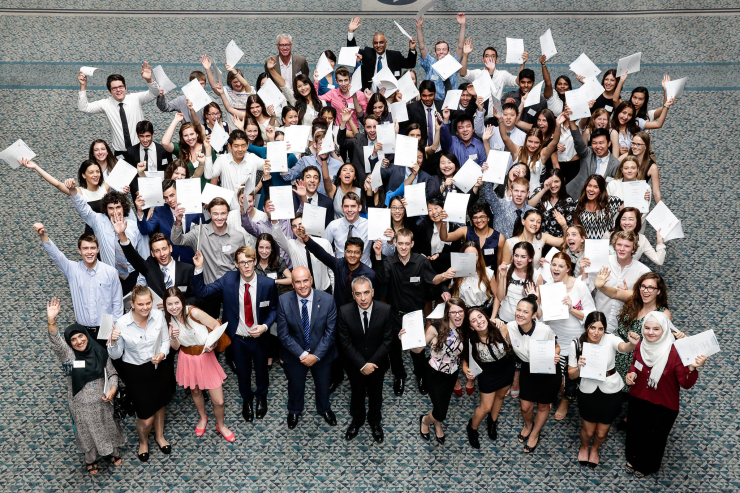 Catholic schools in the Diocese of Parramatta has seen some exceptional results in the 2014 Higher School Certificate (HSC) with a number of schools making significant improvements in their overall results.

On 16 December, the students who placed First in Course for their subjects were acknowledged by the NSW Minister for Education, Adrian Piccoli MP, at a ceremony in Sydney. The Diocese had three students who made the prestigious list.

Executive Director of Schools, Greg Whitby, congratulated the students and teachers on the impressive results.

‘We are proud of the overall improvement our schools are showing in the HSC. The Diocese is committed to driving improvement in learning and teaching and these results are a testament to the collective efforts of students, their families and teachers over the last 13 years.’

Sixteen students from across the Diocese were named on the state’s HSC Top Achievers list for 2014. The Top Achievers in a Course lists the students who have achieved a top band score in their course and placed in the top 20 in the state.

Parramatta Marist High School Westmead has seen their highest number of students achieve Band 6 results in a course with 96 students being named on the HSC Distinguished Achievers. The school was listed at 42 in the Sydney Morning Herald’s top 100 schools in the state for the HSC.

Two students placed on the HSC Top Achievers in a Course List for achieving a top band score in their course and placing in the top 20 in the state.  Joel Domingo achieved fifth in Industrial Technology and Bradley Murphy placed eighth in Studies of Religion I. Damien Abood, Peter Francis, Zachary Jones, Nicholas Marston, Andre Nunez, Vishal Parikh and Vincent Tran made the HSC All-Round Achievers list with results in the top band possible for 10 or more units of courses.

Claudia Palic also was named on the HSC All-Round Achiever’s list for achieving Band 6 results in at least 10 HSC units and 45 students made the HSC Distinguished Achievers list for placing in the top band for one or more courses.

‘These results reflect the strong learning partnership between staff and students over their six years at the college,’ said Cheryl.

St Mark’s  Acting Principal, Jayne Campbell said the community is thrilled with the performance of their students.

‘We are exceptionally proud of the performance of our third HSC class and the teachers who have worked tirelessly to build a culture of success and self-belief in all our students,’ Jayne said.

Patrician Brothers’ College, Blacktown student Adam Boidin was named on the Top Achievers list, placing second in English Extension 2. He also made the HSC All-Round Achievers list for achieving Band 6 results in at least 10 HSC units along with Jordan Cruice. 20 students were also named on the Distinguished Achievers list.

Patrican Brothers’ Principal, Santo Passarello said the school has a proud tradition of success in the HSC.

‘In 2014 we again have two students that have achieved straight Band 6 results, placing them on the merit list,’ said Santo. ‘Adam and Jordan are two exceptional young men, who deserve their success. Their families are very proud of them as is the entire school community.’

Cerdon College were pleased with their results across the board with 82.1 percent of students achieving Band 4, Band 5 and Band 6 results with particularly strong results in English (Advanced), History Extension, Drama, Business Services, Visual Arts and Modern History.

‘The record for HSC achievement by all students at Cerdon College comes down to the fact that students learn in a vibrant, dynamic and positive school culture where personal excellence is embraced,’ said Cerdon’s Principal, Patricia Baker.

Bede Polding College, Windsor South had 30 students named on the Distinguished Achievers list. Student Jamon Daniel Windeyer placed 13th in Legal Studies placing him on the Top Achievers list, and he was also named on the All-Rounders list for achieving results in the top band possible for 10 or more units of courses.

Joshua Hauville from Xavier College, Llandilo placed 11th in Modern History and was named on the Top Achievers list, with 10 students from the school also making the Distinguished Achievers list.

St Patrick’s Marist College, Dundas is very impressed with their results. Sonia Szarycz placed first in Polish HSC Continuers and Vaughn Vincent Majoor placed second in Construction Examination, both of them making the Top Achievers list.  Ian Astalosh was named on the All-Round Achievers list for achieving Band 6 results in at least 10 HSC units and 47 students were named on the Distinguished Achievers list.

St Patrick’s Principal, Angela Hay said as the new principal to the school, she is impressed with the long tradition of strong academic expectations and standards at St Patrick’s.

‘This year we have continued to produce outstanding HSC results, achieving above state average in every subject,’ said Angela. ‘Many students strived for, and achieved their personal best with a very high percentage of students achieving in the top two bands in every subject. I am immensely proud of every student’s performance and every teacher’s commitment in making this happen.’

Aiswarya Venkatsesan from Catherine McAuley Westmead, and Ari Tchetchenian from Marian College, Kenthurst were also named on the All Round Achievers list for achieving Band 6 results in at least 10 HSC units. Both schools recorded high numbers of students placing on the Distinguished Achievers list with 40 students from Catherine McAuley and 39 from Marian College achieving in the top band for one or more courses.

‘I think, as in all schools, these results demonstrate the hard work and commitment of our students and staff,’ Mark said. ‘Our Mathematics results are a particular highlight and we are very pleased with the school’s performance.’

Principal Nic Vidot congratulated St Andrews College students and commended the teachers who mentored them along the way.